Live Dashboard is your command center for observing and handling calls, users, and departments, providing you with information about calls traffic, users' activity, and groups load.

If you activate landscape orientation on your mobile device, Live Dashboard will function much like the desktop version but with a different stacking of windows and elements. In portrait orientation, however, the interface is rather different and may work better for you. It will certainly require less scrolling.  Also, if you reduce the the size of the Live Dashboard window in the Desktop version the layout and controls will change to look like the mobile version.

Access Live View from the Analytics menu on the Welcome Dashboard screen (or from any other screen you opened).

The mobile browser version supports three views (compared to four in the desktop version). Tap the Change dashboard view button, at the top-right corner, to switch between views.

Users View #1 and Users View #2 are similar except that they provide different information about calls in the Calls Tab.

View #1 shows the total number of calls (active+holding). The call details on the right side show the flow for each call (it's progression through the phone system's menus, users, and queues). The direction of the call (incoming or outgoing) is also indicated.

View #2 shows a separate count for active and holding calls. The call details on the right side show the destination of the call (phone number, user, or group/queue).

The filter button at the bottom right corner of the window gives you control over the amount of information displayed in the window.

You can apply more than one filter. For example, with the Groups and Users by Status filters, you can display only those users who are available to take calls in a specific group. Tap Save to apply one or more filters. Tap Clear to remove all applied filters. 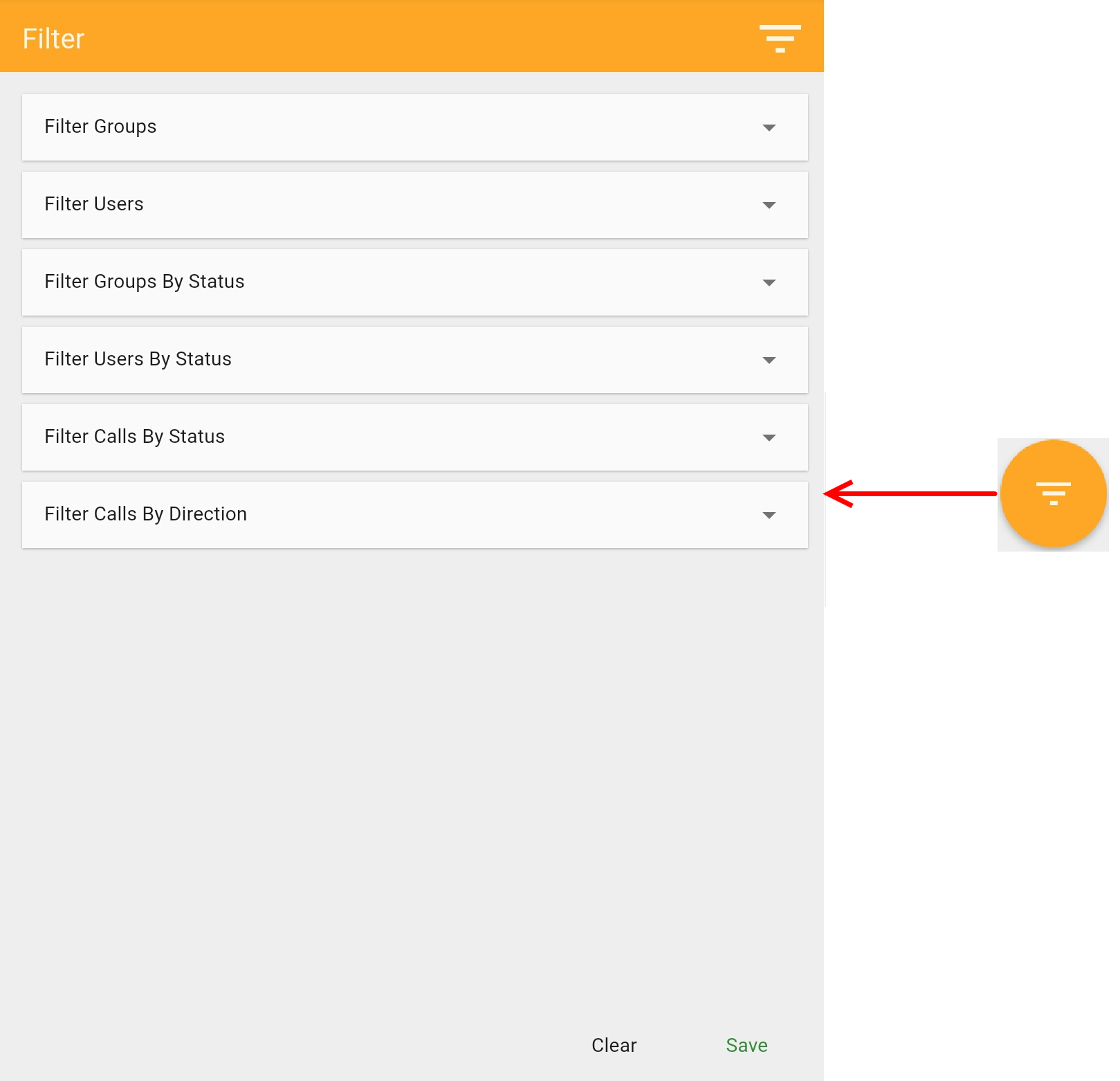 When you apply any filter the filter button will be marked with a red dot to remind you that the information you see is filtered out.

This is the default view with three different tabs for Calls, Users, and Groups. 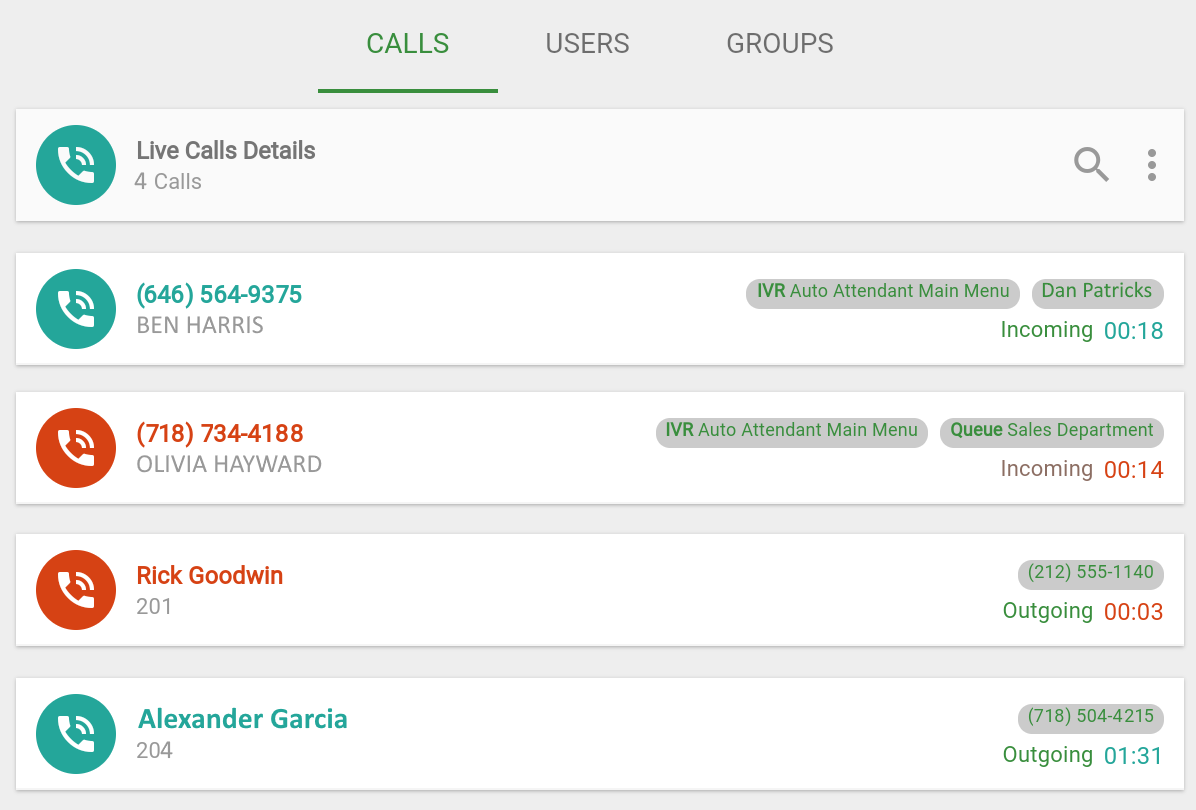 Tap the menu on the top-right corner to display calls sorting options:

Tap the magnifying glass to search for calls by name or number. Non matching results will be hidden. To display all the calls again tap X. 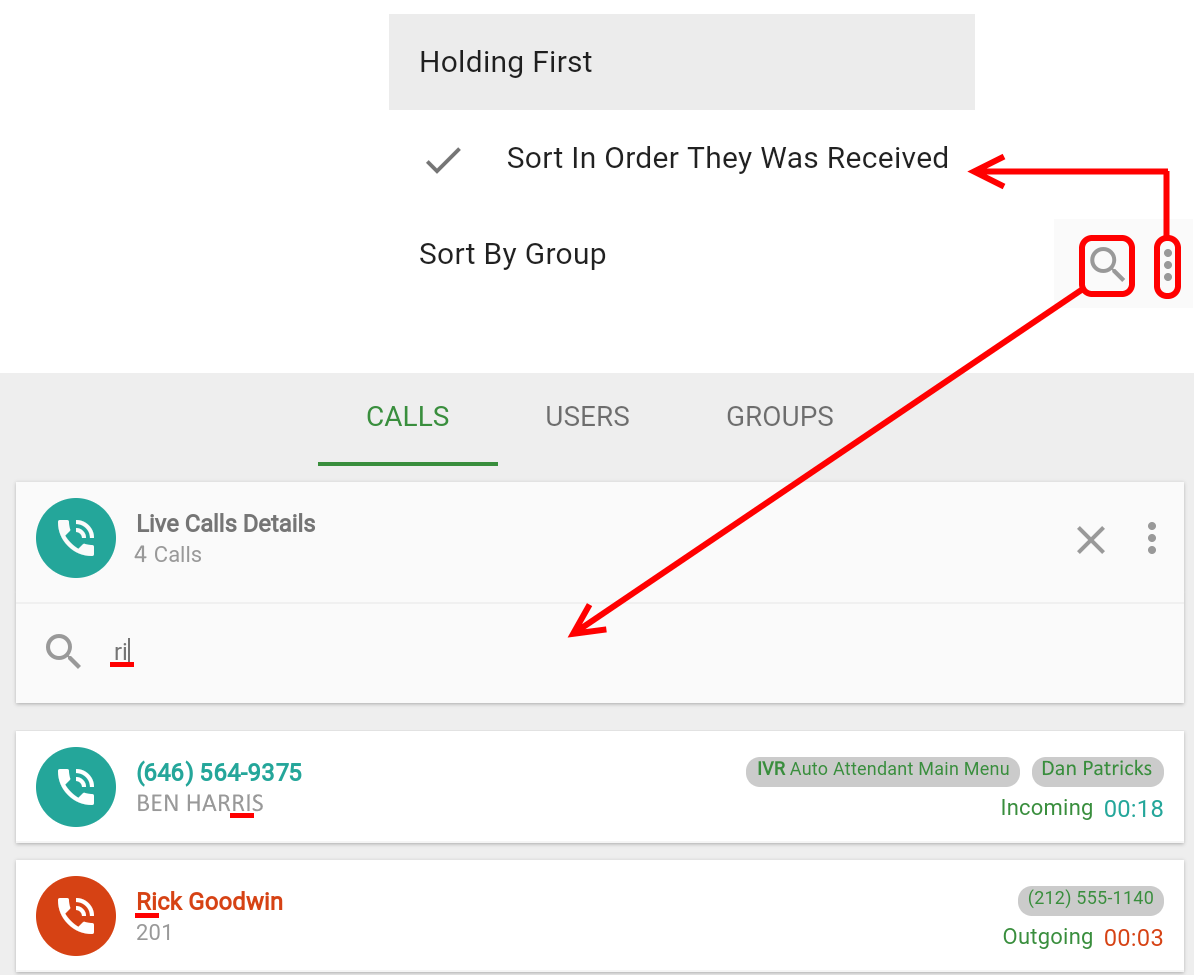 Looking closer at at each call  we can see several items of information:

After a call has been answered by a user, clicking it will show a 3rd call action. 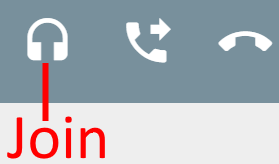 Hang Up - self explanatory. You will be asked to confirm you want to hang up the call and once you do the call will be disconnected. 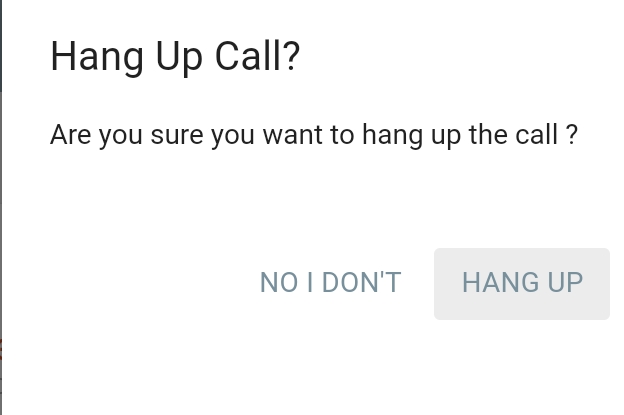 Redirect - this is one of the most important tools of the Live Dashboard, allowing you to distribute calls, handle overflow, and match the right users with the right customers. When you tap the button, it will open a window with two tabs where you can redirect the call to either groups or users. Select an agent or a queue in the appropriate tab and tap Redirect Call.

Join Call - click this to listen to a call by joining the conversation. A prompt will ask you to approve this and then your administrator phone line will ring. When you pick up, a conference call will be created between yourself, the user, and the person he is talking to. Mute your microphone to just listen to the conversation.

For this feature to work, a phone line needs to be defined and associated with the Analytics account currently logged in otherwise you will see a "You do not own any phone line" error.

It is also possible to join a call using a dial code. You can read more about this here.

There are two filters that are relevant in this view.

Filter Calls By Status - check to select to display either only Holding Calls or only Active Calls.

Filter Calls By Direction -check to select to either only Incoming Calls or only Active Calls.

The Users Tab provides an overview of user's extensions and availability status. Notice that if a user has more than one extension each will appear separately, as in the case of Alexander Garcia.

The possible statuses are: 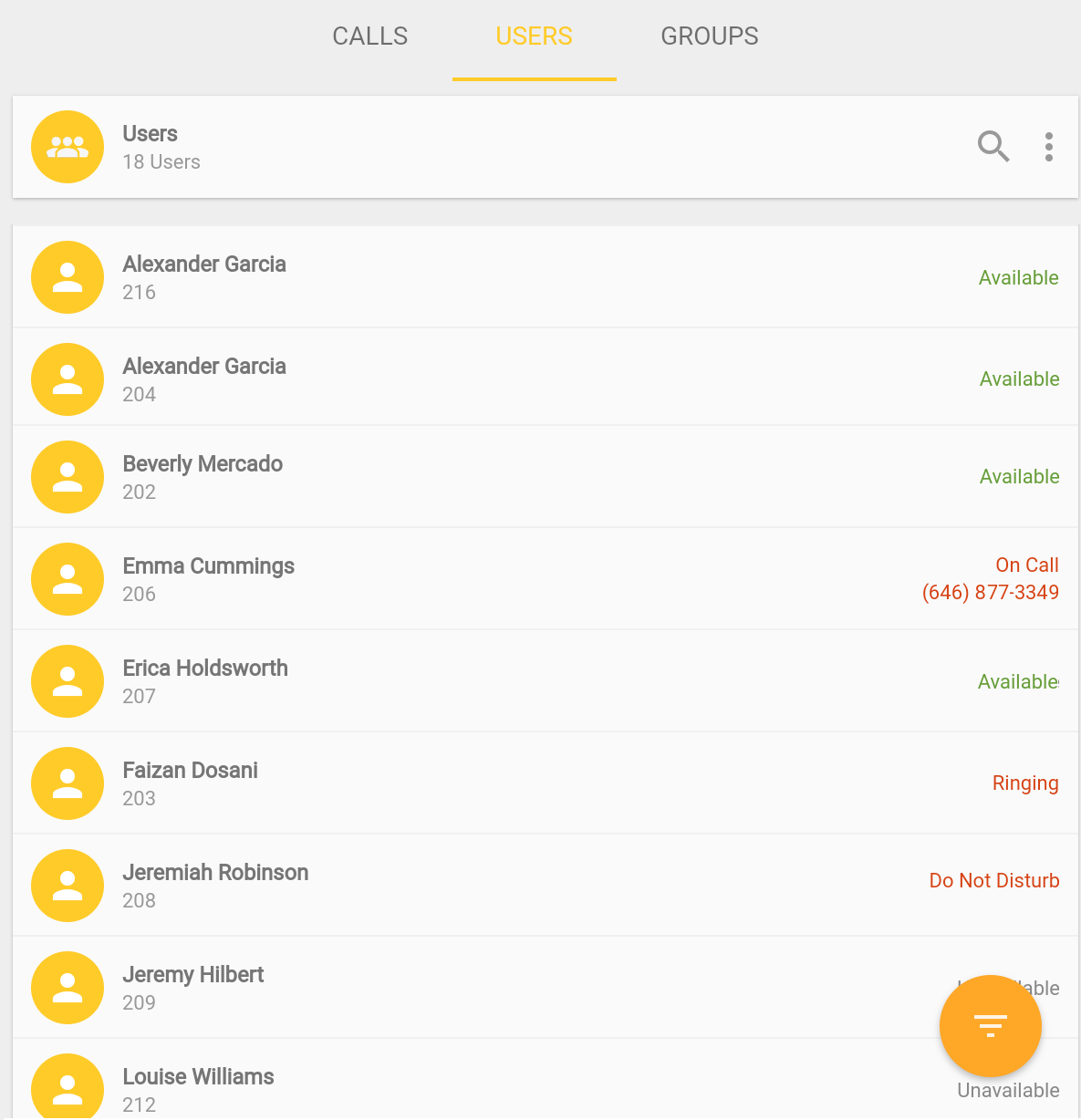 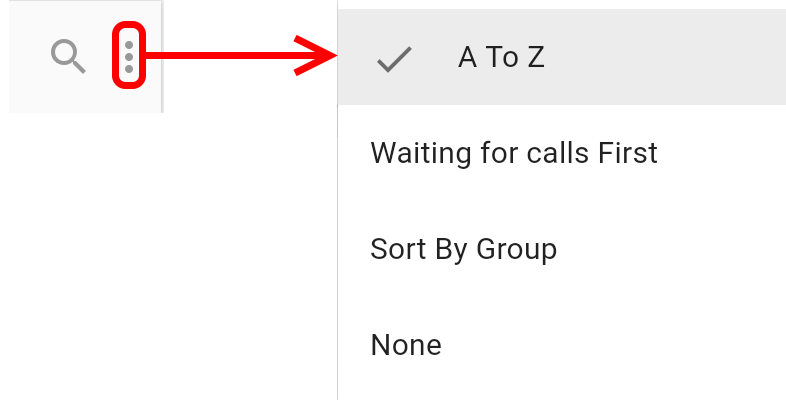 Tap the magnifying glass to search for users by name. Non matching results will be hidden. To display all the users again tap X.

There are two filters that are relevant to the users tab:

The Groups Tab provides details of the number of holding and live calls for each department. The sorting and filtering options are especially useful here for getting an overview of the the call load for your entire phone system or call center. 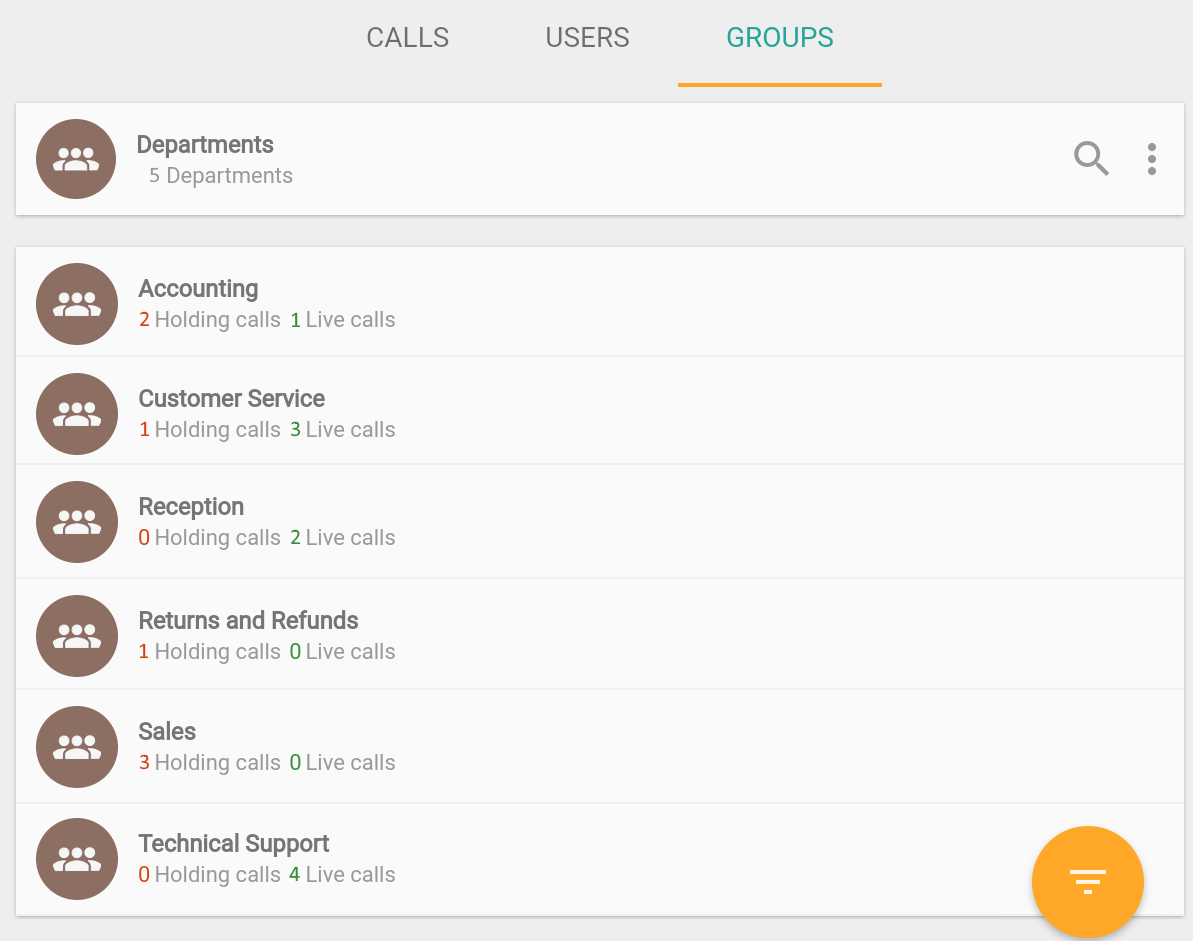 Tap the menu on the top-right corner to display queues sorting options:

Tap the magnifying glass to search for queues by name. Non matching results will be hidden. To display all the queues again tap X. 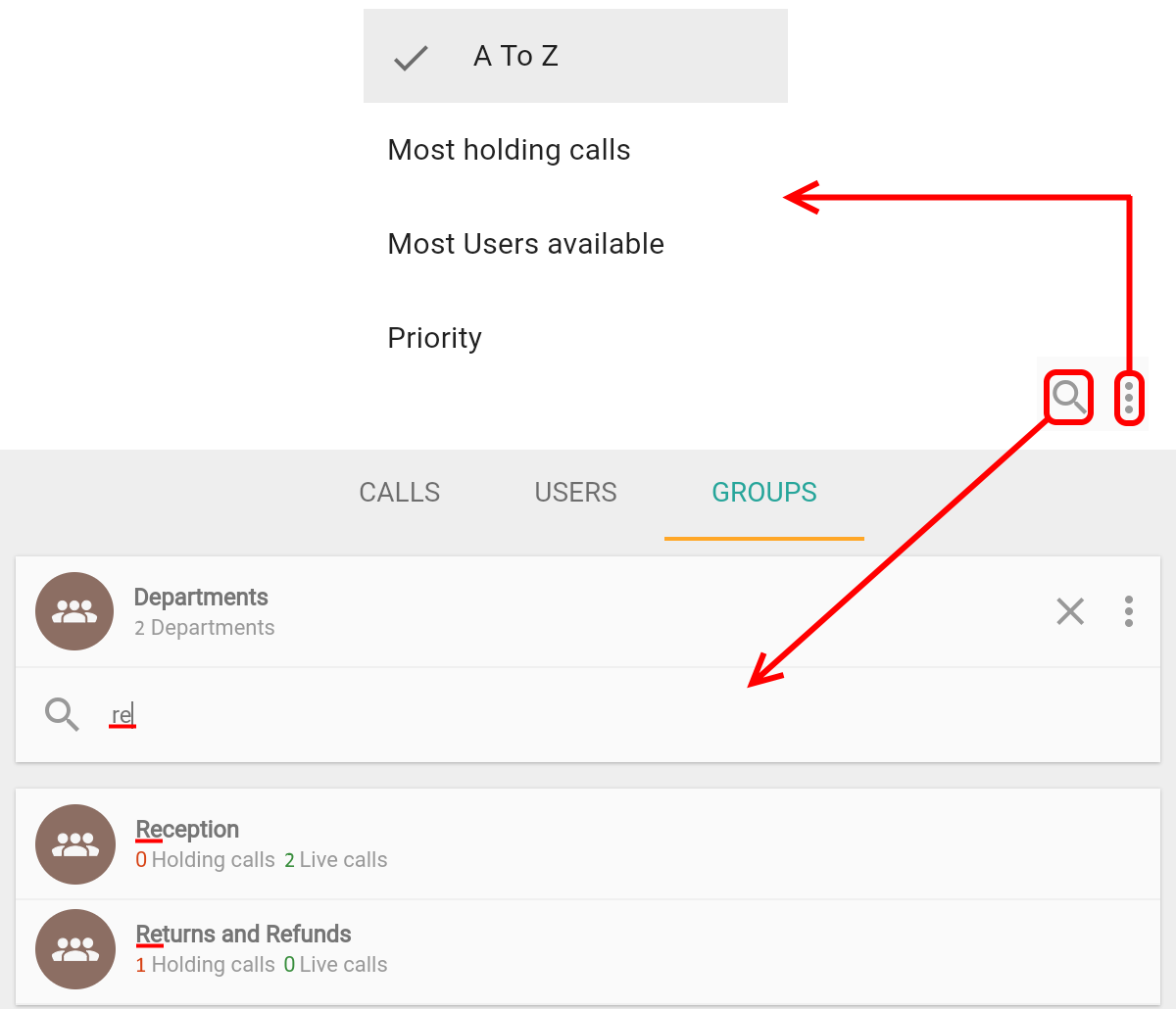 There are two filters that are relevant to the Groups Tab:

In this view you can see holding and active calls for each group separately. There are no tabs in this view, but It is a useful view when you need to focus on the traffic of particular groups instead of seeing all the calls at once as they appear in the calls tab (see above).

The number of holding calls, live calls, and agents (which for our purposes is the same as users) who are assigned to the group are indicated. With this you can easily estimate the status of the groups and its overflow potential.

Tap the left or right arrow to switch to another group. 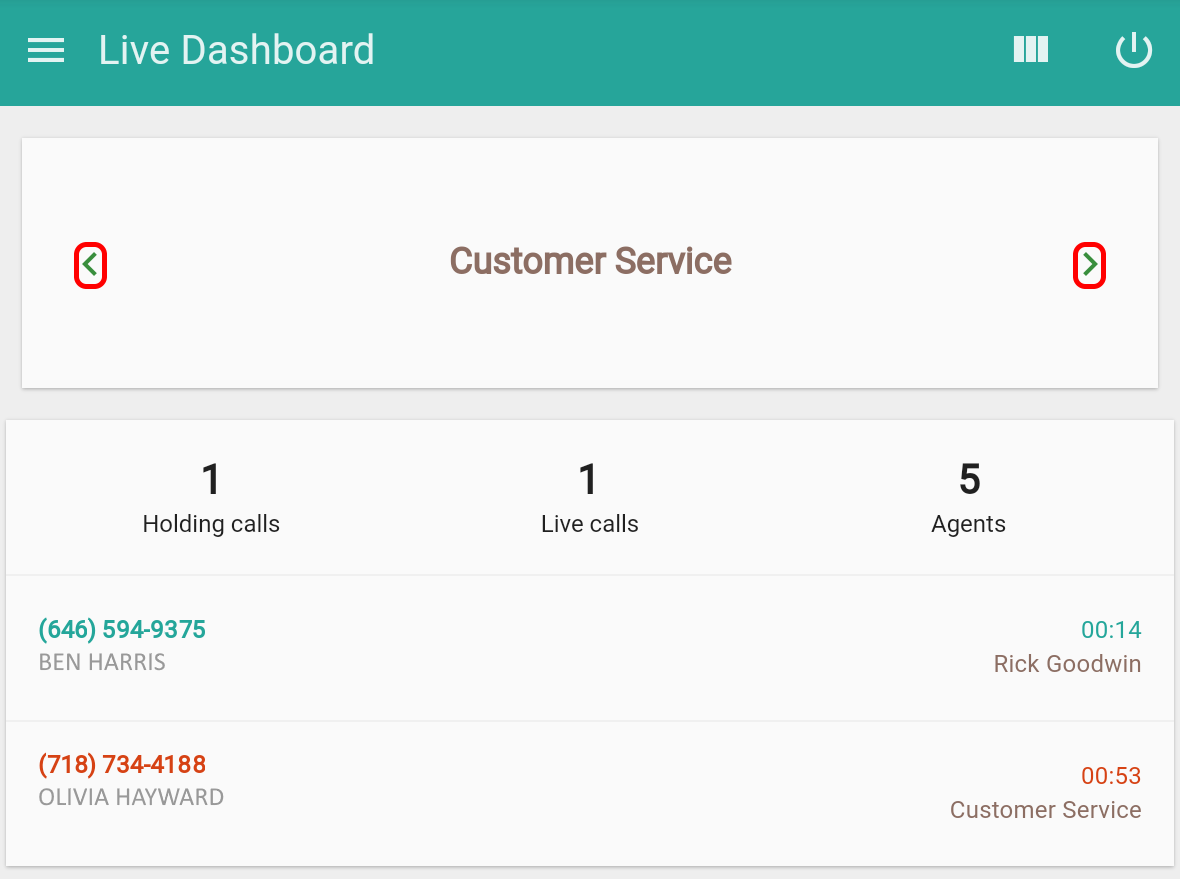 If the call was picked up the name of the user who took it is shown under the duration of the call.

Notice that while there are 5 agents assigned to the group, it doesn't necessarily mean that all of them are available to take calls. They may have activated Do Not Disturb mode or logged out of the group on their TeleConsole account.

Tap any call to access call actions for it. Call actions here work just the same as in the Users view (see above). 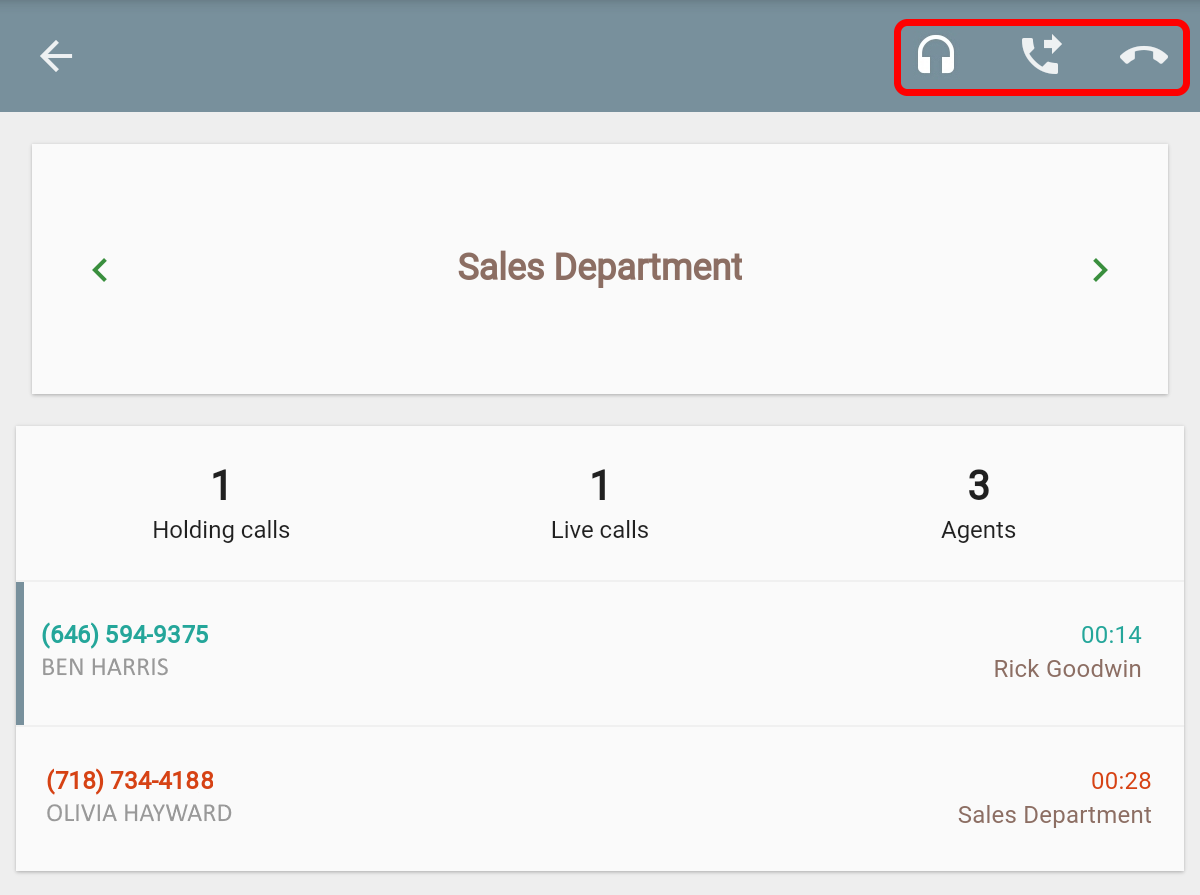 Four filters apply to this view except (Calls by status and Calls by Direction do not apply). See the User view above for more details on each filter.