The visibility and availability of conversations and SMS/MMS messages depend on channels (lines) settings and selection. It is also possible you have selected to show only unread conversations or have blocked some numbers from receiving messages.

Some or all Conversations Are Not Found

If you can't see any messages, the first thing to check is if you have selected to show only Unread Conversations when you don't have any unread conversations. Simply select to show All Conversations to fix this.

If All Conversation is selected there still might be a problem with either a "No messages found" notification being displayed or some of your conversations appear to be missing.

When this happens you need to check the SMS Text Channels – MANAGE PHONE NUMBERS option in the TeleConsole settings and ensure that at least one of your SMS channels (lines) is active!

You can also activate the default SMS channel (which is selected in the Messages settings) simply by starting a new conversation with it.

If you switch off all the channels you will not see any prior messages. If only one channel is active you will only see the conversations previously received on it.

If a channel is inactive you are still receiving messages for it. These are stored on the Telebroad server and become accessible as soon as you activate the channe.

Messages Are Missing In a Conversation or not Being Received

In this situation you can see all your conversations, but you notice that some messages are missing inside the conversation themselves or you cannot receive new messages for a conversation even if the sender confirms he messaged you.

This happens because you have changed the SMS line you are using for sending a message from the drop-down menu at the top of the conversation you opened. 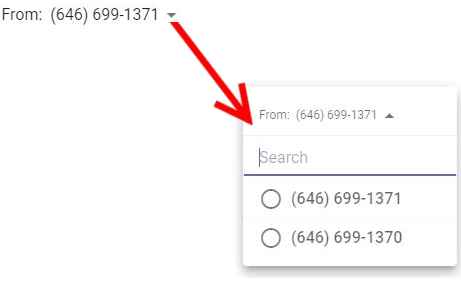 When you do this the content of conversations is affected and only messages delivered to the selected line will be shown at any given time!

To fix the problem simply select the line you originally used for starting the conversation or to receive messages for.

Note that changing the line may also split the conversation at the recipient's end, making it seem like he is missing some messages from you in each of the split conversations.

If you have the correct SMS line selected but still can't receive new messages for a particular number it is most likely you have blocked the numbers from receiving SMS messages.Blocking numbers is usually done to deal with SPAM messages, but it is possible you may have blocked a number unintentionally.

If a number is blocked you can simply click

.You can also remove it from the blocked numbers list in the Messages Settings where you can click MANAGE BLOCKED NUMBERS to open a list of blocked numbers for each SMS channel (a channel will show on the list only if it has blocked numbers.) Click

next to a contact name or number you want to unblock. 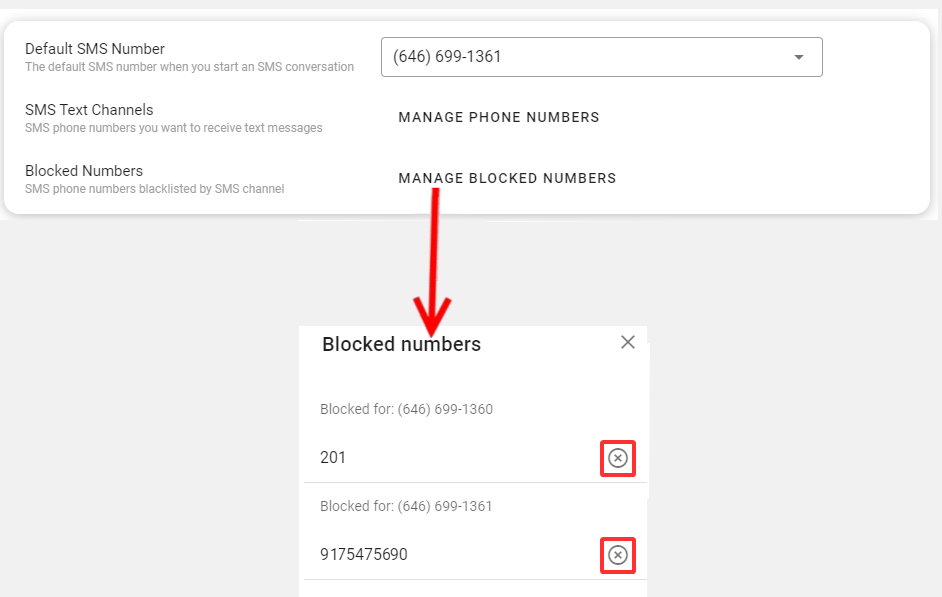